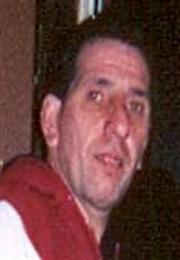 Obituary of Richard B. Swank

Please share a memory of Richard to include in a keepsake book for family and friends.
View Tribute Book
Richard B. Swank, age 56 of Penns Grove died Saturday January 15 2011 at his residence. He was born in Latrobe, PA and is the son of Helen G. Hill Swank, of Pennsville and the late Forrest B. Swank. He was employed as a truck driver for Carney's Point Twp and Cannizzaros Trucking. He was a avid fisherman and loved spending time fishing with his grandson Mikie and brother Tracy. He also enjoyed horse racing and was an avid Eagles fan. Survived by his wife, Sheila A. Christopher Swank, stepsons, Michael Mattson of FL, Frank Mattson, Jr., of Auburn, stepdaughters, Michelle Dolbow of Pennsville and Laura Oliver of Pedricktown, brothers, Tracy Lee Swank of Pennsville and William R. Hill of Cambria, PA, sister, Sally Rappa of Pennsville, 10 grandchildren and many nieces &amp; nephews. Predeceased by brothers Terry and Victor Swank.
To plant a beautiful memorial tree in memory of Richard Swank, please visit our Tree Store

Look inside to read what others have shared
Family and friends are coming together online to create a special keepsake. Every memory left on the online obituary will be automatically included in this book.
View Tribute Book
Services for Richard Swank
There are no events scheduled. You can still show your support by planting a tree in memory of Richard Swank.
Plant a tree in memory of Richard

Share Your Memory of
Richard
Upload Your Memory View All Memories
Be the first to upload a memory!
Share A Memory
Plant a Tree