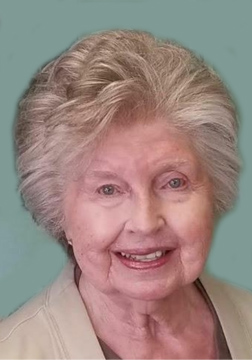 Please share a memory of Mary to include in a keepsake book for family and friends.
View Tribute Book
Mary Jane Grams Scruggs, 91, from Pennsville, NJ, departed this Earth on November 30, 2022, after living a full and beautiful life. Mary Jane was born in Burkittsville, MD. in 1931 to Samuel Columbus Grams and Minnie May Butts Grams and grew up on the family farm with her sister Jean Elizabeth and nephew Loring Young. The Grams opened their home to help feed those who were struggling during the Great Depression and WWII. Mary Jane left the farm at age 17 to pursue a career in nursing. She graduated from Frederick Memorial Hospital School of Nursing in 1951 then worked at George Washington University Hospital and for an ENT physician in Washington, D.C. There she met her "Navy Man", Marshall Scruggs on a blind date. After they married in 1952, Mary Jane and Marshall moved to Woodstown, NJ for new jobs (Marshall at DuPont Chambers Works and Mary Jane at Salem County Memorial Hospital as a Registered Nurse). They later settled in Pennsville to raise a family. Mary Jane began work as a visiting nurse for the Salem County Health Department. She was the first nurse assigned to the new Migrant Health Program and was instrumental in the launch of the Family Planning Program. Mary Jane earned her BS in Nursing at University of Pennsylvania in 1972. She became the Director of Nurses and led the creation of additional programs and services at the health department. After managing the county's Nursing Division, Mary Jane retired in 1997 with 30 years of service. Mary Jane's greatest passion was music. She started playing piano in the fourth grade, singing with her family and at church. After moving to NJ, she later sang in choirs at the Salem Presbyterian Church, Trinity Methodist Church, the Oak Singers, and the Delaware Valley Women's Chorale group. She also performed as a competitive ballroom dancer and was a nationally recognized award-winning amateur. Mary Jane was a past member and Trustee of the First Presbyterian Church in Salem and was a member of the Trinity Methodist Church since 2000. As a member of the Pennsville Women's Club, she served on the Fundraising Committee and chaired the Community Improvement Committee for several years. Mary Jane loved to travel, mostly with her church, choir and ballroom dancing groups, highlighted with trips to China, Russia, and a cruise to England on the QE2. Mary Jane is survived by her four children: Michael L. Scruggs (Christine) of Newark, DE; Laura J. Scruggs (William H. Johnson Jr) of Bridgeton, NJ; Matthew S. Scruggs (Audrey) of Los Angeles, CA; and Christine M. Hooks of Pennsville, NJ. She is also survived by grandchildren: Michael L. Scruggs Jr.; Jason Scruggs (Stephanie); Steven Scruggs; David Scruggs (Shelby); Christen M. Hooks; and Lauren J. Hooks; Timothy Klumpp and Meaghan Hurr; and by great-grandchildren: Abigail Scruggs; Jagger Scruggs; Madeline Scruggs; Evan Scruggs; Joseph Scruggs; Thomas Scruggs; Simon Scruggs; and Cooper Scruggs; as well as her nephews and nieces Loring Young (Cathy); David Young (Sharon); Anna Fridley (Merle) and many great-nieces and nephews. Mary Jane was predeceased by her Parents; former husband Marshall L. Scruggs; sister Jean Elizabeth Grams Young; nieces Christine Young and Maryland Young Horman Linton; and nephew Paul Young. Funeral services, managed by Laughrey Funeral Home, will be held at 11am Wednesday December 7th at the Trinity Methodist Church, S. Broadway & Church ST, Pennsville, NJ where there will be a viewing from 10:00 to 11:00am. Interment will follow in Overlook Cemetery in Bridgeton, NJ. In lieu of flowers, the family suggests contributions to the Trinity Methodist Church at 67 S. Broadway, Pennsville, NJ 08070. www.laughreyfuneralhome.com
To send flowers to the family or plant a tree in memory of Mary Scruggs, please visit Tribute Store
Wednesday
7
December

Share Your Memory of
Mary
Upload Your Memory View All Memories
Be the first to upload a memory!
Share A Memory
Send Flowers
Plant a Tree