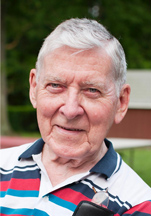 Please share a memory of Estel to include in a keepsake book for family and friends.
View Tribute Book
Estel M. (Stoney) Stoneman, 92, of Pennsville, NJ, passed away peacefully with family by his side on Friday, January 21, 2022 ending a long struggle with dementia. Estel was a warm friendly loving husband and father. Those he met describe him as kind and easy going. His core and character were solid. After graduating high school in 1947, he began work in the Petroleum Laboratory of the DuPont Chambers Works and joined the US Army in early 1951. He married Allene Carr later that year and celebrated a short honeymoon in New York City before being assigned to duty in Germany in the signal corps. Upon completing his military service, he returned home to his wife and job with DuPont. Together they built a family and life in Pennsville. His job ultimately led him to worldwide travels where he circled the globe over three times. Upon his retirement, he made the most of life by expanding his hobbies and enjoying time and travels with his family. His goal was to live life in retirement as long as he had lived life in work, and he achieved his goal. Estel was an avid walker and you would find him making a 1.6 mile loop around town well into his 80's. He was also an accomplished woodworker, craftsman, and enjoyed gardening. As many have shared, he was one of the good guys! He is survived by his three children, Sandra Stoneman McWilliams, of Louisville, KY, Wm. Terry Stoneman (Kelly), of Middletown, DE, and Daniel Stoneman (Kristan), of Easley, SC. He has eight grandchildren: Kyle McWilliams (Brianne), Megan McWilliams Jones (Ainsley), Erin McWilliams (Lucas), Scott McWilliams (Amanda), Ashley Stoneman Parker (Larry), Jaynell Stoneman Keely (Brian), Tyler Stoneman, and Avery Stoneman, and nine great-grandchildren. He is also survived by his sisters Eddith Hogate and Edna Loveland of Pennnsville. Estel is predeceased by his wife of 60 years, Allene Stoneman, parents Clyde and Donna Stoneman, his siblings, Emery Stoneman, Inez Stoneman, and Howard Stoneman. Due to the ongoing health risks, services will be private at the Laughrey Funeral Home with internment at Grace Lawn Memorial Park in New Castle, Del. In lieu of flowers, the family asks that expressions of sympathy be dedicated to a charity of your choice. A celebration of Estel's life is being planned for later this summer. www.laughreyfuneralhome.com
To send flowers to the family or plant a tree in memory of Estel Stoneman, please visit Tribute Store
Monday
31
January

Share Your Memory of
Estel
Upload Your Memory View All Memories
Be the first to upload a memory!
Share A Memory
Send Flowers
Plant a Tree