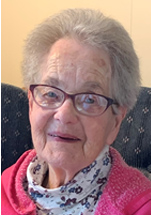 Please share a memory of Maria to include in a keepsake book for family and friends.
View Tribute Book
Maria C. SaxvanderWeyden, 92, of Pennsville, daughter of the late Jacobus and Maria van der Heyden, died peacefully at home on November 12, 2021 with her family by her side. She was born in The Hague, The Netherlands, in 1929 and immigrated to the United States in 1955, settling in Lake Hiawatha in northern NJ. In October of 2003, she moved to Pennsville. She was a stenographer/typist in her early years in America, and later became a bookkeeper, retiring in 1991. She is survived by two sisters, Christina (Ineke) and Agnes, both residing in the Netherlands; two sons, Daniel and daughter-in-law Donna, Paul, all of Pennsville, and a daughter Agnes, of Wilmington, DE.; two granddaughters, Danielle Wilson, her husband Will and Megan. In addition to her parents, she is predeceased by one brother, Jacques, and two sisters Antonia, and Thea. Maria was the widow of her late husband, John SaxvanderWeyden (2005) Funeral services will be held 11:00 AM on Thursday November 18th at Laughrey Funeral Home, Pennsville where friends may call from 10:00 to 11:00 AM prior to the service. Burial will follow at the Eglington Cemetery, Clarksboro, NJ, with a reception following at First Assembly of God, 380 Georgetown Road, Carneys Point, NJ 08069. In lieu of flowers, the family requests donations be made to Cornerstone Women's Resource Center, 567 Salem Quinton Road, Salem, NJ 08079 www.laughreyfuneralhome.com
To send flowers to the family or plant a tree in memory of Maria SaxvanderWeyden, please visit Tribute Store
Thursday
18
November

Share Your Memory of
Maria
Upload Your Memory View All Memories
Be the first to upload a memory!
Share A Memory
Send Flowers
Plant a Tree