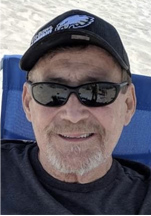 Please share a memory of Joseph to include in a keepsake book for family and friends.
View Tribute Book
Obituary of Joseph Paul Pflieger 1957-2021 Joseph Paul Pflieger passed away suddenly at the age of 64 on September 22nd in his home of Naples, Florida, after many years of battling several illnesses. He was a cancer survivor and had a fighting spirit that helped him overcome many of his health issues. Joe was born to Madeline and Glendon in 1957 and raised in Pennsville, NJ. He graduated with the class of 1977 from Pennsville Memorial High School and went on to have several professions he was very proud of including Volkswagen mechanic, construction worker, Union painter, and finally traveled southern Florida with a roofing company. He loved to talk about all of the interesting places he painted, especially the Delaware Memorial Bridge. As proud as he was of the work he accomplished, nothing made him more proud than his two daughters, JennaLyn and LaraBeth, and his grandchildren, Jacquelyn, Benjamin, and Beau. He was young at heart and was always telling stories of his wild days and all of his adventures before he had children. He loved to listen to loud rock and roll, genuinely loved discussing the weather in detail, and when he was in better health, he loved to go fishing. He was widowed in 1994 when his beloved wife, Roxanne Pflieger, passed away. He then moved to Florida once his daughters graduated high school. Joe is survived by his daughters JennaLyn Pflieger Haskell (Chris) and LaraBeth Botto (Jordan), his grandchildren Jacquelyn, Benjamin, and Beau, his nephew Glen Rollo (Christi) and many nieces, nephews, and cousins. Joe was preceded in death by his wife, Roxanne, his father, Glendon, his mother, Madeline, his brother, Edward (Buddy), and his sister, Virginia (Ginny). Services to lay him to rest in New Jersey alongside of his wife, Roxanne, will be held at a later date. www.laughreyfuneralhome.com
To plant a beautiful memorial tree in memory of Joseph Pflieger, please visit our Tree Store

Look inside to read what others have shared
Family and friends are coming together online to create a special keepsake. Every memory left on the online obituary will be automatically included in this book.
View Tribute Book
Services for Joseph Pflieger
There are no events scheduled. You can still show your support by planting a tree in memory of Joseph Pflieger.
Plant a tree in memory of Joseph

Share Your Memory of
Joseph
Upload Your Memory View All Memories
Be the first to upload a memory!
Share A Memory
Plant a Tree