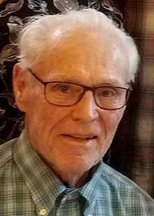 Please share a memory of Richard to include in a keepsake book for family and friends.
View Tribute Book
Richard James Myers Sr. died on April 30, 2021, a few weeks shy of his 93rd birthday. Born on May 22, 1928, he is the son of John Joseph and Edna Mary (Zimmerman) Myers. He and his nine brothers and sisters were raised in the Friendship area of Penns Grove next to the gravel hole. A strong swimmer, Richard was a lifeguard at Friendship Beach and later at the Riverview Beach Park pool. He left Catholic school early to work in his father's cinder block business and in his late teens he became a first class pipefitter at the Dupont powder plant in Carney's Point. He met Esther Virginia Spicer at the Riverview Beach roller skating rink and they married in 1948. The couple raised their three children in the Penn Beach house that Richard built and in which he and Esther lived for over 60 years. Richard was skilled in many industrial arts and when the powder plant closed he went to school for welding and used his combined pipe fitting/welding expertise to maintain the equipment and buildings at Mannington Mills. He took pride in his work and considered no job complete until it was "plumb, level and square". Those in Richard's inner circle remember with a smile his penchant for using maxims such as "measure every job with a safety rule" and "if you can't be good be careful". In his leisure time Richard enjoyed going to the horse races, watching professional sports, socializing in the local tavern and listening to country music, especially that of George Jones. Richard was a devoted husband, attentive father and loving grandfather. He is survived by his wife of 73 years, his sister Mary Taylor, his sister-in-law Betty Myers and his children Richard James Myers Jr. (Susan), Linda Alice Myers Jackson (Harold), and James Patrick Myers. He is also survived by three grandchildren, Amber Myers, April Nixon (Ra'Shad), Derek Jackson (Katie) as well as three great-grandchildren and many nieces and nephews. A celebration of Richard's life is planned for a future date. www.laughreyfuneralhome.com
To plant a beautiful memorial tree in memory of Richard Myers, please visit our Tree Store

Look inside to read what others have shared
Family and friends are coming together online to create a special keepsake. Every memory left on the online obituary will be automatically included in this book.
View Tribute Book
Services for Richard Myers
There are no events scheduled. You can still show your support by planting a tree in memory of Richard Myers.
Plant a tree in memory of Richard

Share Your Memory of
Richard
Upload Your Memory View All Memories
Be the first to upload a memory!
Share A Memory
Plant a Tree