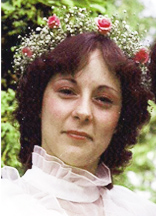 Obituary of Cheryl A. Vitale

Please share a memory of Cheryl to include in a keepsake book for family and friends.
View Tribute Book
Cheryl A Vitale, age 65 of Pennsville passed away Sunday March 28, 2021. She was born and raised in New Brunswick, NJ, and was the daughter of late Charles Lineberger Sr and Anne Lineberger. She then later moved to Pennsville with her husband Michael D Vitale Sr of 30 years, who she raised her two sons with, Michael Vitale Sr and Peter Vitale. She was currently retired from her former employment as an Administrative Coordinator at Astra Zeneca Pharmaceuticals. She was highly respected by her coworkers and very proficient in her work. Cheryl helped support the community along side her husband Michael as a CCD teacher in Pennsville. Among her many hobbies like reading books, watching movies, and playing with her cats and dogs, her favorite was being a member of the Shire of Barren Sands, Society for Creative Anachronism, Inc. where she was a throwing weapons marshal, who loved to teach new members. Besides her children Michael and Peter, she is survived by her brother and sisters: Charles G Lineberger Jr, Arline Ubl, Patricia Thall, Nina Lineberger, Her brother and sister in-laws: Annette Mullen, Margie Vitale, Patrick Vitale, Nieces and Nephews: Anthony Tretola, Lisa Tretola, Robert Mullen, Angela Vitale, Stephen Vitale, Joseph Vitale, Melissa Ubl, Angelina Pisarki, Marty Thall, Samatha Thall, and Great Nieces and Newphews: Anthony Tretola Jr, Lilly Tretola, and Nicholas Tretola Funeral services will be held 1:30 PM on Thursday April 1st at the Laughrey Funeral Home, Pennsville, NJ where friends may call from 12:00 to 1:30 PM prior to the service. Burial will be private at the convenience of the family. www.laughreyfuneralhome.com
To send flowers to the family or plant a tree in memory of Cheryl Vitale, please visit Tribute Store
Thursday
1
April

Share Your Memory of
Cheryl
Upload Your Memory View All Memories
Be the first to upload a memory!
Share A Memory
Send Flowers
Plant a Tree