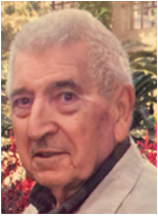 Please share a memory of Stanley to include in a keepsake book for family and friends.
View Tribute Book
Stanley O. Reese passed away on Sunday, February 28, 2021. Stanley was "one of the good ones" and will be dearly missed. He is preceded in death by his Maternal Aunt Edith (nee Miller) and Uncle Abner Minnick who raised him in Conyngham PA, his three brothers Donald, Guy and Kimber, his three sisters Arlene, Pauline and Geraldine and his beloved wife of 56 years, Patricia Ann (Libby). Stanley is survived by his three cherished daughters Sheryl DiBiase (Pete), Barbara Reese and Donna Ciaccio (John). He is also survived by his 3 dear grandchildren Meaghan DiBiase, Jason Ciaccio (Laura) and Ryan Ciaccio and two nieces Becky Cox (Tom Rodgers) and Tamara Cox. After his High School graduation, Stanley enlisted in the US Army's ASTP in Engineering in November 1943. This program was cut soon after Stanley's enlistment due to the need for increased infantrymen in Europe in WWII. Stanley then went to Europe in 1945 as part of the Black Hawk Division, Company K. His Company was in combat in France, Germany and Austria. When the War ended Stanley's Company was sent to the Philippines to protect the Islands. After Stanley's discharge from the Army, he attended the Pennsylvania State College (now University) on the GI Bill. Stanley proudly graduated from Penn State with a B. A. in Education in 1951. Stanley started his career in Education in 1951 as a teacher at the Port Deposit High School in MD. It was here where he met another first year teacher, Patricia Libby from Newport NH, who in Stan's words "made his life". Stanley and Patricia married on 9/2/52 in New Hampshire and continued to teach in Port Deposit for another year. In 1953, Mr. and Mrs. Reese moved to Pennsville NJ and became teachers at Pennsville Memorial High School. Stanley also served as the first Baseball Coach for the High School. Stanley earned his Masters Degree in Education from Rutgers University in 1961 and was the Assistant Principal of PMHS from 1961-1962. From 1962 until his retirement in 1985, Stanley was the Principal of the Pennsville Middle (Junior High) School. He enjoyed all aspects of being the Principal of this school and worked tirelessly and was completely dedicated to insuring that all the students received a quality education. Stanley loved spending time with his family, in particular, the many sporting events attended and all the vacations and Holidays spent together, all things Penn State (especially Penn State Football & Wrestling), the NY Yankees, U. S. History, gardening, Musicals, Lawrence Welk, Jimmy Sturr's Polka Party, WJBR radio station, monitoring Weather forecasts and Missing Vowels puzzles. Stanley's services will be held privately for the family. In lieu of flowers, the family suggests donations be made in Stanley's memory to the Educational Foundation of Pennsville Public School District, PO Box 263, Pennsville NJ 08070 or the Penn State Wrestling Club, PO Box 1103, State College, PA 16804. www.laughreyfuneralhome.com
To send flowers to the family or plant a tree in memory of Stanley Reese, please visit Tribute Store
Friday
5
March

Share Your Memory of
Stanley
Upload Your Memory View All Memories
Be the first to upload a memory!
Share A Memory
Send Flowers
Plant a Tree