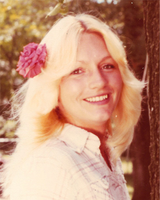 Charlene Elizabeth Demaris Boyce, Clayton, DE. Charlene passed from this life to the next on January 23, 2020 at the age of 67. Born on March 19th, 1952, Charlene grew up in Sharptown and moved to Pennsville, NJ. Charlene was the daughter of Joan DeMaris Straub and stepdaughter of Francis (Sonny) Straub. Charlene was a 1970 graduate of Pennsville High School and had her son, Gary Poeta later that year. In 1978, she married her sweetheart, Barry Boyce. Charlene was employed by the State of Delaware Justices of the Peace Courts administrative offices until 1998. Known as the "go to girl", Charlene had a pivotal role among her office colleagues during a time of information technology changes. She enjoyed taking computer classes and bringing that knowledge back to her department. Charlene had a lifelong affinity for horses and enjoyed trick riding and barrel racing as a child. Also, in younger years, she could often be found out dancing with friends. She was an active wife, mother, and grandmother, making herself available whenever anyone needed a babysitter, a visit, or just a smile. She devoted countless hours to being with her grandchildren, providing an endless source of joy within her family. In recent years, she and Barry enjoyed their motorcycle and traveling in their RV with their faithful German Shepherd, Cami, who never left their side. Charlene's warm personality and gracious smile made everyone around her feel comfortable and welcome, and she cultivated close relationships with family and friends over the course of her lifetime. Charlene is survived by her husband Barry, her son Gary and his wife Heather, her grandchildren Jordan and Julian Poeta, her brother Francis (Len) Straub, her niece and nephew, Chelsea and Dominic Straub, her brother Robert (Bob) Straub, his wife Trina, and niece Nikki Reed, her brother John Straub, and nephews John and Jake Straub, her brother in law Joseph (Dave) Boyce, her nephews Doug Boyce and Christopher Dunk, her brother in law Rick Boyce, his wife Dottie, and nieces Brandi and Becca, and multiple family members from the Ecret, Caulfield, and DeMaris families. Charlene is predeceased by her parents Joan and Sonny Straub, her father and mother in law Joe and Loretta Boyce, and her brother in law Kerry (Steve) Boyce. As Charlene wished to be cremated, in lieu of graveside services, a memorial service will be held at Laughrey Funeral Home on Friday, January 31st at 6pm in Pennsville, NJ, with a gathering of family and friends at the Pennsville VFW immediately thereafter. www.laughreyfuneralhome.com