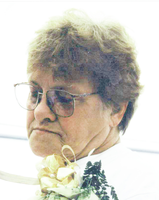 Isabella M. Owens (Shaw) age 86 of Pennsville formerly of Philadelphia died Friday October 4, 2019 at her home. Born in Philadelphia she was the daughter of the late Elmer Shaw and Isabella Shaw Harner. She worked in a bank and retired with Wachovia in Center City, Philadelphia. She married her late husband Franklin S. Owens Jr. in June of 1953 who died in 2003. She is predeceased by brothers George Shaw and Elmer Shaw, daughter Joyce Owens, and Son Franklin Owens. She is Survived by sister Viola Scheurer, sons David Owens of Pennsville and Steven Owens of Bridgeton grandson James Owens whom she raised, 8 other grandchildren and 5 great grandchildren. Funeral services will be held 10:00 AM on Saturday October 12, at the Laughrey Funeral Home, Pennsville where family and friends may call from 9:00 to 10:00 AM. Burial will follow at the Hillside Cemetery in Roslyn, PA. www.laughreyfuneralhome.com