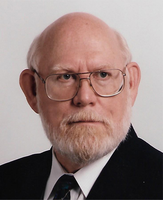 James H. Featherer James H. Featherer, age 80 of Clayton, NJ died Saturday July 27, 2019 at the Jefferson Hospital, Washington Township, NJ. He was born in Los Angeles, CA and was the son of the late James Horner Featherer and Rebecca Wood Featherer. James was a retired United States Air Force Tech Sergeant and a Vietnam Veteran. Following his retirement from the Air Force he went to work at the Pentagon in Washington, DE as a Contracting Officer until his retirement. Survived by a nephew and several nieces. Predeceased by his two brothers, Robert Lee Featherer and Donald Featherer, sister, Elsie Funeral services will be held 11:00 AM on Thursday August 1, at the Laughrey Funeral Home, Pennsville where friends may call from 10:00 to 11:00 AM prior to the service. Burial will follow at the Lawnside Cemetery, Woodstown. www.laughreyfuneralhome.com