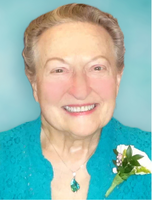 Sylvia Reichner Kimmel of Friends Village, Woodstown, NJ has died at the age of 89. A long-time resident of Pennsville, NJ, she was born in Brooklyn, NY in 1931. She was predeceased by her parents Anna Weiss Reichner and Israel Reichner; her husband, Dr. Elias M. Kimmel; son, Gary P. Kimmel; and sisters, Jean Gobel and Rose Nemerow. Sylvia is survived by her daughter Linda G. Gallagher (Hugh), CO; daughter-in-law Amy Heller Kimmel, NJ; grandsons Joseph M. Kimmel, (Vaughnda Johnson), CA; and Jason A. Kimmel, (Kellie), NH. Survivors also include many cousins and nieces and nephews. With then four-year-old son, Gary, the Kimmels settled in Pennsville in 1957, where Dr. Kimmel established his Optometric Practice. Daughter Linda was born the following year. In addition to working as office manager in her husband's office for many years, Sylvia was active in community services. She participated in the PTA and served as President of the Sisterhoods of Shari Tzadek Synagogue in Penns Grove and Temple Beth Shalom in Salem. She was active in the Woman's Club of Pennsville since 1958, having served on the Board in many leadership positions including Village Fair Chair (six years), Spring Luncheon Chair (ten years), and the Arts Performing Day Chair (four years). In addition, Sylvia served on the Board of the Pennsville Library for 20 years. During her tenure on the Board, it initiated and approved many significant changes to keep up with technology and improve services. As a volunteer for Salem County Hospice for 14 years, Sylvia visited hospice patients to provide companionship, conversation, as well as respite for caregivers. Sylvia also served on the Board of the Pennsville Visiting Nurses Association (VNA) for 15 years. Starting her tenure before the Township funded the VNA, she helped to raise funds for several years, including soliciting contributions door-to-door. Sylvia was an active participant in the Livingroom Gatherings, initiated by Dr. Rachel DuBois (a local educator, human rights activist, and pioneer of intercultural education), to bring together locals from different backgrounds to discuss issues of the day. Participants represented different races, religions, and ethnic backgrounds, and the lively sessions helped to bring everyone together and to recognize that their similarities were greater than their differences. Sylvia is mentioned several times in Dr. Du bois' book, All This and Something More. From a young age, Sylvia enjoyed dancing. She choreographed and performed in many school theater productions. In different times, she would have pursued those interests, but she was a child of the Great Depression. She also played violin in her high school orchestra. Sylvia was a life-long learner, reading the newspaper and books, listening to National Public Radio, and surfing the web to keep up with the times. Her photography hobby garnered Sylvia several prize ribbons from the Federation of Woman's Clubs and the Pennsville September Fes. She never a met a stranger, starting conversations with just about anyone she met whether at social gatherings or in line at the grocery store. She was happiest when her whole family was visiting and took pleasure in memorializing those times with many photographs. In lieu of flowers, the family suggests donations to the American Jewish Joint Distribution Committee jdc.org or Community FoodBank of New Jersey cfbnj.org. www.laughreyfuneralhome.com