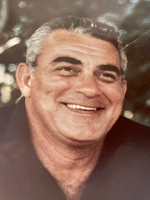 Leslie (FUZZ) MacDonald 84, of Carney's Point, NJ, passed away, on December 31st 2020. Les was a lifelong sport enthusiast stemming back from his days as a record breaking pitcher at Penns Grove High School. He also was an avid Philadelphia Sports Fan even though it was a LOVE HATE relationship. He was born in Wilmington DE but lived most of his life in Pennsville, NJ. He coached at Pennsville Little League and Babe Ruth. However, his greatest love was umpiring as a charter member of the Delaware Valley Umpire Association. As many remember, his strike zone was tight which caused many boos from the stands. Les was a chemical operator with DuPont Chambers Works, Deepwater NJ until he retired after 36 years. Les was the son of the late Marie (Clarke) & Leslie MacDonald. Predeceased in death by sisters Teresa Foreman & Betty Lou Lilly. He is survived by his Sister Helen Cox. Loving father and Pop Pop he raised three children in Pennsville. He is survived by daughter, Billie Carberry (Ed O'Boyle), son Leslie MacDonald, son Will (Sarah) MacDonald. Five Grandchildren Taylor, Ashley (Andrew), Liam, Jack, and Evan. Two Great – Grandchildren Mason & Ronan. He is also survived by his former spouse and friend Sally MacDonald. Everyone that knows Les knew he loved to tell stories, had a great sense of humor, enjoyed fishing, and playing cards. Due to the restrictions of COVID, the burial will be private. The family asks in Lieu of flowers, please consider contributing to Pennsville Little League, PO Box 129, Pennsville NJ 08070. www.laughreyfuneralhome.com